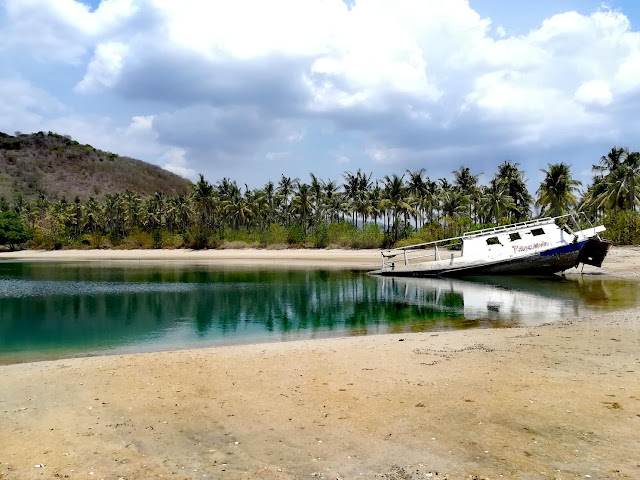 One of the reasons for my current trip to Asia, was to build on the success of a homestay project set up by a friend of mine, Guy Adams.

Around eighteen months ago, Guy befriended a local man named Andar on the island of Lombok, Indonesia. He stayed with Andar and his family and felt compelled to help turn his village into a place where travellers like him might stay awhile, experience life, and learn a little.

Lombok serves as Bali’s little brother in terms of its burgeoning tourism, but while their are thousands of family hotels in Bali, Lombok has few major destinations and tourists often stick to resorts.

Guy raised money for Andar and his family to build an accommodation block, built an online presence, and asked that all guests participate in Andar’s community project to teach English to the local children after school.

I spent nearly three weeks in the small village on the Sekotong peninsula, close to Lembar harbour on West Lombok. Here's my take on what the experience was like. 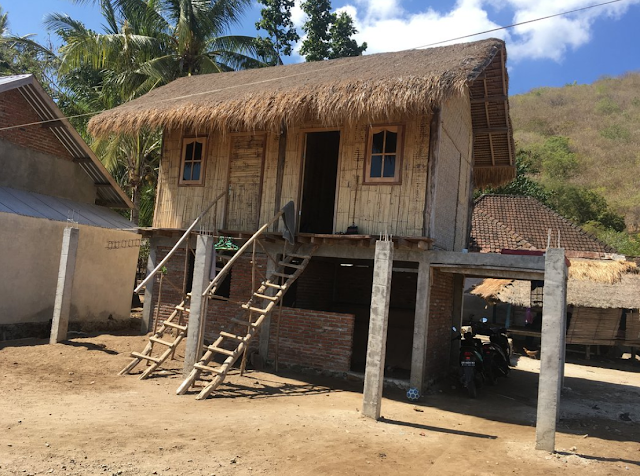 Andar collected me from the harbour on his scooter and we rode the twenty-five minutes back to his village. I'd met a Vietnamese bloke on the ferry, who had broken his leg weeks earlier in a scooter crash, so despite Andar's good driving, it was a bit of a white-knuckle ride.

For the first couple of days, myself and Melanie, and Austrian (not Australian) volunteer didn’t teach classes as we had arrived in a period of mourning. Nine days after the burial of a relative, families gather for a big feast and prayer ceremony. We helped with the preparations - wrapping sweet coconut rice in  leaves to steam, and clearing up the parts of the banana tree that couldn't be eaten. We stopped short of skinning the goat that had been slaughtered though.

On the day, fifty or so members of the extended family visited from nearby villages. That's one thing I learned in my time in the village - everyone is related somehow. It turned out that one of the kids who is three years old, is Andar's uncle!

It was a special experience to be included in proceedings even though we were very clearly outsiders. Andar really has the right idea in including the volunteers to ensure that cultural learning goes both ways . . . and our steamed sweet coconut turned out well.

The island is deeply religious and most residents pray five times a day with women and elderly men wearing more traditional Islamic dress. In fact the community were in the middle of building a new mosque in the village. If we wanted a beer, we actually had to swim to a restaurant on the nearest island, Gili Sudak! 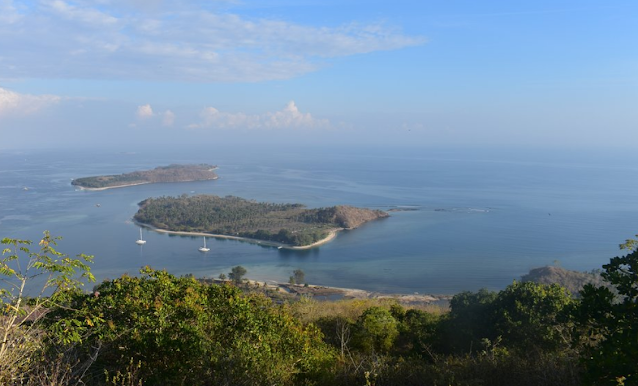 The homestay is located on the Sekotong (pronounced skotong) peninsula, the bit of South Lombok that juts out to the left. It's close to the ferry port and consists of palm lined coastal ridges, fishing villages and four islands, which are know for good snorkelling and attract day trippers from hotel resorts.

Residents are generally small hold farmers, builders or fishermen. Public services are scarce, everyone over the age of ten drives a scooter, and they know how to make good use of the local resources. Houses are simple concrete constructions with sheet roofs, basic bathrooms, and outdoor kitchens. Most households have an open-sided ‘gazebo’ which acts as the living room. The bamboo platform is where all the action happens - families spend time together, sitting cross-legged, guests are received there, and most meals are served there too. People only tend to go inside to sleep, so if you are coming to this part of the world, don’t expect to sit on chairs or stay inside much!

The nearby hillsides provided excellent views of the area and were great places to watch the sun go down. 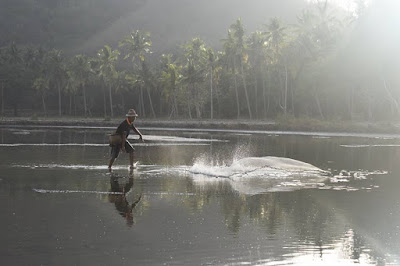 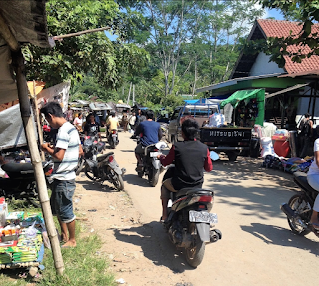 Teaching English to the children 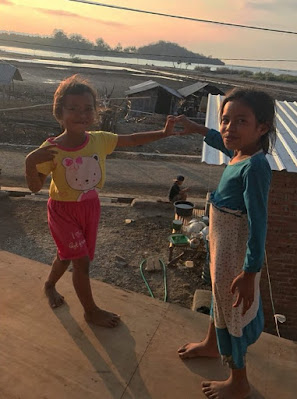 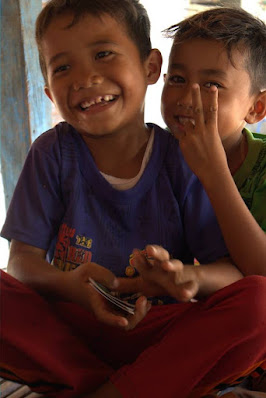 In Lombok, children start school at the age of six, so it's up to parents and relatives to try and give them a head start on reading, writing and the basics. Most girls will go to public senior schools and boys complete as many years of boarding school as they can afford.

Photos of the smiling kids represent their characters perfectly. They are energetic, bright, and happy. They love nothing more than to run around in the great playground of their neighbourhood finding weird and wonderful objects, bothering animals, climbing trees, digging for shells and firing elastic bands at each other.

We taught classes six days a week, which the kids enjoyed. I imagine the games and active participation in lessons were quite different from their schooling. While many of the children are bright, their level of English is low, and they are clearly more accustomed to reading and writing in the classroom, than interacting in a foreign language. 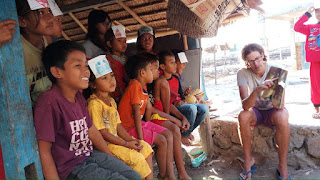 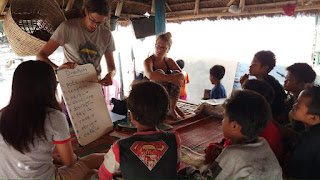 Normally, I'm an English writing coach for publishing professionals. These classes were very different. During the lessons, we focussed on useful vocabulary like directions, shopping phrases and increasing their repertoire of verbs. For such low level learners, it was useful to have Andar, members of his family, and some Indonesian volunteers to help translate at times. We did a blindfolded obstacle course, a theatrical production of The Gruffalo, and if all else failed, they loved running about playing ‘Simon Says’.

The younger children (3-7) usually learn in a separate class and do simple games relating to numbers, colours etc. Andar has a good amount of resources like whiteboards, paper, flashcards, and story books, and Guy is busy sourcing some English Language books so they can learn in a more structured way and track their progress. 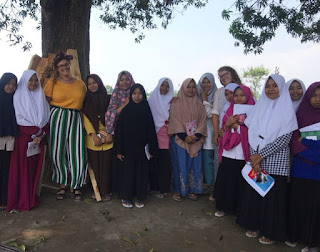 On my final Monday, I visited Andar’s old senior school with Alex and Melanie, the two other volunteers. I was glad to go with two girls who are successful in their own professions and were also keen to share their life experiences with the children. The school is staffed entirely by volunteers and had been damaged by the recent earthquakes. The children came from all over the island, and studied, ate, prayed and lived together in the classrooms. Although they were nervous at first, they were soon  asking for our Instagram accounts and telling us all about where they were from.

All in all, interacting with the kids was great. The project has ensured that they have a much broader perspective of the world and are getting plenty of extra learning outside of their school hours. 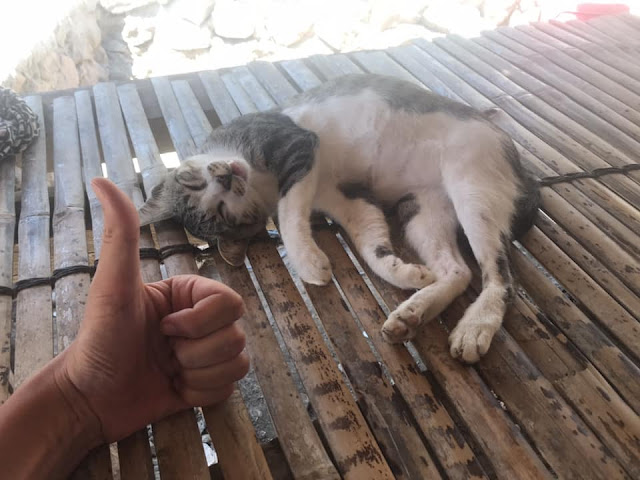 I think my favourite part of volunteering was being part of a real community. Just down the road there are newly constructed holiday bungalows with a fancy restaurant and white sun loungers. After staying with Andar and his family, the place seemed laughably false - big white empty boxes with no one staying there!

There was always something going on in the village. Everyone keeps animals - goats, chickens, cows, cats, birds - so there is plenty of opportunity for mucking in (or mucking out), trying to stop the goats eating the ingredients for dinner, stopping the cat eating your dinner and stopping the stray dogs eating the animals for their dinner. I was glad I brought earplugs though, because all of those animals are early risers, and bloody noisy too.

Three times a day, travelling sales people come by. We saw cosmetics sales parties, vats of noodle soup being doled out from the back of a scooter, the ice cream driving along with his catchy music. And, if the women of the house weren’t buying food, they were busy making it. I’m not exaggerating when I say the meals provided by Andar’s wife, Hikma, were second-to-none. Most consisted of rice, fried tempeh, tofu, vegetable soups (corn, water spinach), coconut curries with banana tree heart, papaya and jackfruit, fish dishes and bean sprout salads. Oh, and everything is laced with plenty of Lombok (that means chilli in the local language). As a vegan, I was spoiled for choice and was very well accommodated. 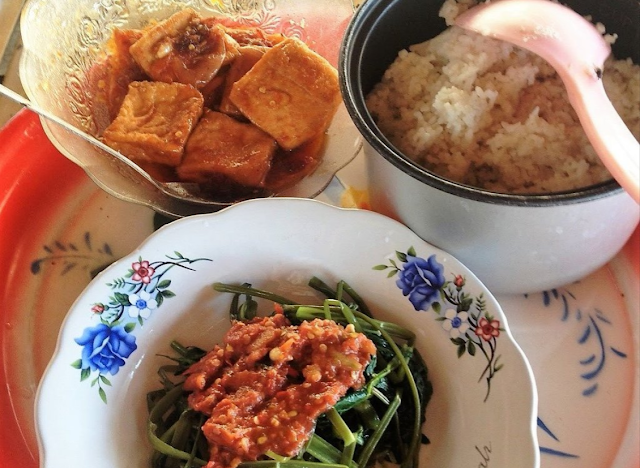 Families there were making home improvements all the time. Fences, roofs and gazebos made of locally cut bamboo and banana tree. In my time with them, Andar and his family built a shop for his sister and finished the balcony on our accommodation block.

Another thrilling moment, was when Andar revealed that he had come into possession of a one kilogram platinum ingot. Holding something that could be worth $30,000 was not something I expected when paying only eight pounds a day for food and lodging.

We inspected the thing, Googled the hallmarks and stamps, and speculated a lot about precious metals, jewellers and the possible origins of the block (made in 1808 and validated in 1968). Andar called a friend and conducted tests on it with a gas welding torch, but he seemed no closer to knowing if it was real or not. It turned out that there are several examples being sold online, so he remained unconvinced. Was it too good to be true?

What I learned in Lombok 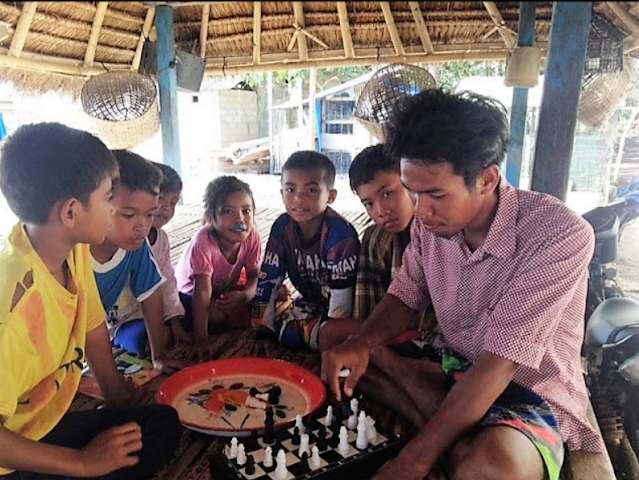 My biggest take-away from my two and a half weeks on Lombok, was the sense of how families and the wider community helps to teach youngsters about life, death and everything in between. One example of this was how the boys played chess with each other, taking on older and better players as they progressed. I haven’t played in years, so I generally lost, but one of the twelve-year-old boys, Torik, could beat everyone in the village. None of them had ever read a book about chess, received a lesson, or watched an instructional video, it was all through knowledge passed down, and hours of practice.

Other than that, the experience made me think about more about travel and tourism, how it affects places for better or worse, and how there are many ways to help others.

I believe the homestay needs to steer clear of the Voluntourism trend, where travellers come simply for their own sense of self satisfaction and ego. In the age of social media, posting selfies with the kids might garner some likes, but it won’t help the children long term. Volunteers can help Guy and Andar work towards long-term goals by staying for enough time that the children learn to trust them and can learn from them. Classes should be structured so that the children know what’s expected of them and can track their own progress. Finally, volunteers can try to ensure that the children are polite, respectful, and take care of their possessions.

Andar is a really genuine person. He is committed to inspiring kids to learn English and improve their prospects at school and in the world of work. His free classes already attract twenty or so children, and I’m sure future generations will join too. I hope that his homestay turns into a real community learning centre, with a small library, clubs and organised activities in addition to English classes.

Something else I've discussed with Guy, is the possibility of sponsoring some of the children to go to senior school with the money paying for their food, clothes and books. I'll bring you news of any developments.

I’d would like to congratulate Guy and Andar on creating such a mutually beneficial and successful project. The money received from volunteers undoubtedly helps the community, and broadens the perspectives of both parties involved. Many thanks also to Alex and Melanie who provided lovely photos, and adequate sarcastic humour to the experience. 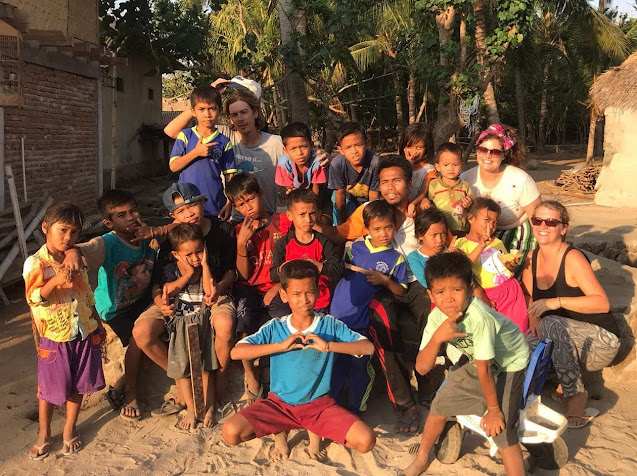 If you would like to know more about the project, you can visit Lombok Volunteer Homestay via their website, Facebook page, or read their reviews on Trip Advisor.